Christmas Experiences In Umbria and Tuscany: What To Do Near Il Fontanaro

Easily reachable from Il Fontanaro there are many traditional villages that during Christmas holidays become even more magical and enchanted, here the best places to go during this great time of the year, enjoy!

In Montepulciano a characteristic Christmas market awaits you, with eighty wooden houses and themed decorations. The market is placed in the magical setting of Piazza Grande, in via San Donato and in the adjacent streets. Inside the market it will be possible, of course, also to taste specialties and hot foods typical of quality street food. 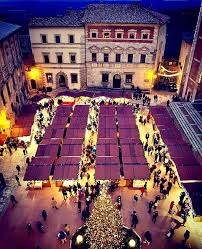 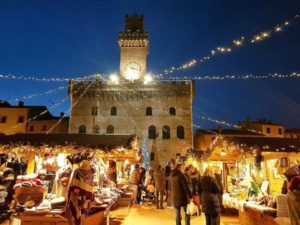 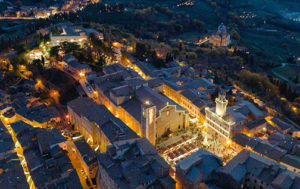 Great attention has been paid to the originality of the products sold in the market, with the involvement of artisan associations and the presence of diversified product categories: Christmas decorations, food products, sweets, clothing and leather goods, local handcrafts and much more.

The market, thanks to the vast pedestrian area available, is also the ideal place for a series of shows and entertainment activities for the whole family.

from 26th December to 6th January

From December 6th to January 6th the magic of Christmas returns to envelop the historic center of Cortona, with lights, decorations and the scents of delicious sweets coming from the little wooden markets!

The decorations and the music that will expand through the alleys of the whole center will make the atmosphere even more suggestive. For Christmas shopping lovers there will be markets in Piazza Signorili, while for the little ones there will be the possibility also this year, to meet Santa Claus in his home at Palazzo Casali and for art and history lovers, the MAEC will remain open for all the Christmas holidays and will allow anyone to admire the paintings of great artists and others.

In addition to fairy lights, decorations, and various sweets, there will also be cribs in the various hamlets of the municipality, including the long-awaited Living Nativity of the Pietraia. 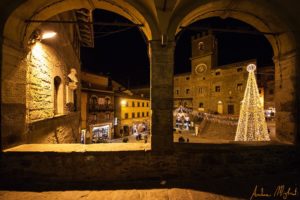 From December 1st to January 7th 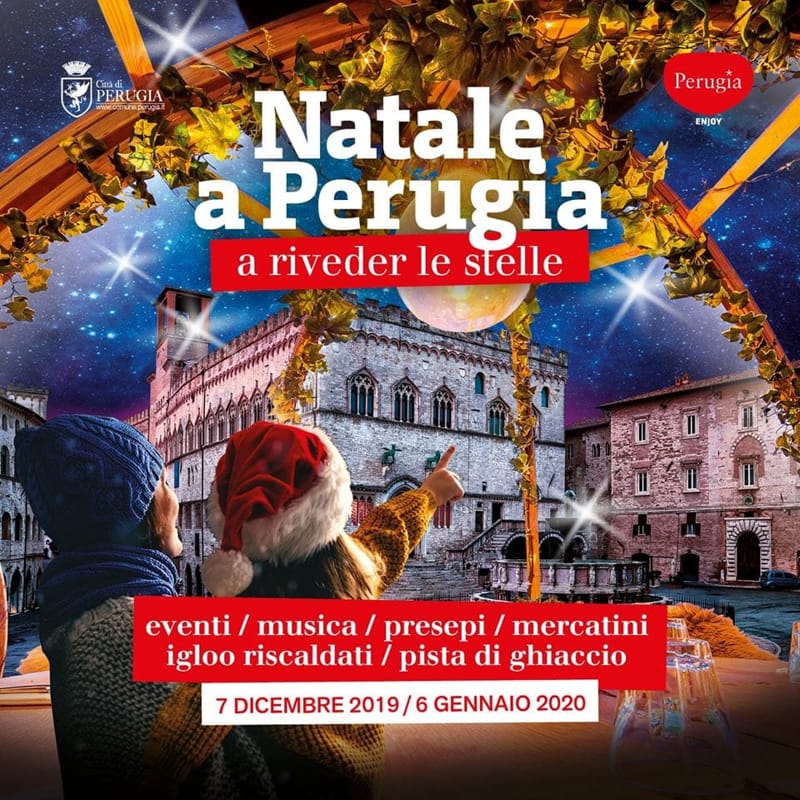 The Municipality of Perugia is also preparing to celebrate 50 years from the historic moon landing. He does this by hooking up to the Christmas festivities, launching the initiations of the “stellar Christmas”.

In particular, from December 6th until January 7th 2020, the historic center will come to life with locations reminiscent of the Nordic countries, lights and typically Christmas music, without forgetting, of course, a space for culture. An astronomical museum with an educational planetarium will be set up in Piazza Matteotti; will then be offered workshops on the world of astronomy for the little ones, organized by the Post at the Centro Camerale Alessi in Via Mazzini.

For those who want to enjoy a pleasant “warm” moment, heated igloos will be set up in Corso Vannucci, where it will be possible to have dinner in the moonlight. There will also be an ice rink under the stars set up in Piazza Matteotti this year.

Finally, for fans of Christmas markets, at the Rocca Paolina it will be possible to delight in typical stands and stalls, keep on reading! 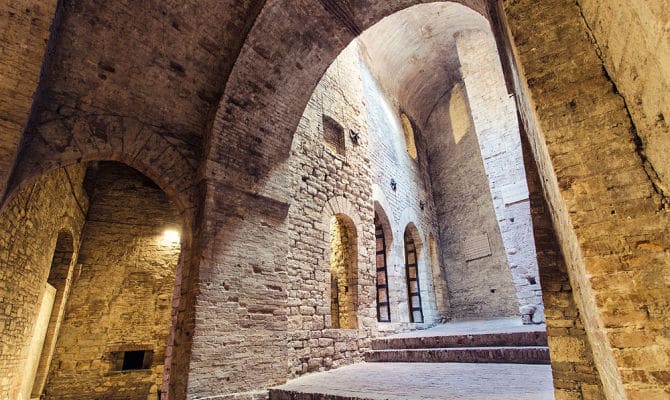 This festival in Perugia‘s historic 16th-century La Rocca Paolina fortress is the the biggest holiday market for gastronomy and artisanal products in the region of Umbria. Additional food and wine stalls will also be located throughout Perugia’s historic center, and craft stalls can be found in Piazza Italia. 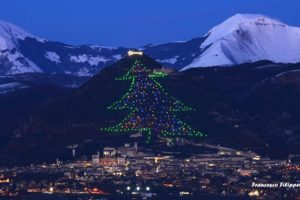 Gubbio becomes a true Christmas city, with incredible attractions and events for young and old.

Come and discover ChristmasLand, the fantastic markets, the biggest Christmas tree in the world(since 1981 a group of volunteers has realized for Christmas what has entered in the Guinness Book of Records as the World’s Largest Christmas Tree!), 3D videomapping on the façade of the Palazzo dei Consoli, the Ferris wheel, the cribs in the streets of the city and much more.

A city of lights, charming, fun and romantic to let you experience the magical atmosphere of Christmas!

The Christmas Of Assisi

From December 1st to January 6th

Assisi this year comes alive with lights, sounds, colors, moments and places that we will make special to celebrate Christmas.

A rich program of events that will touch the historic center and the hamlets, the most famous and most unusual places of the Seraphic City, with some highlights: the exhibition of the many nativity scenes throughout the territory, the animation of the live nativity scenes in the hamlets , the lighting of the illuminations and Christmas trees, the liturgical celebrations and solemnities, the auspicious concerts for the new year. 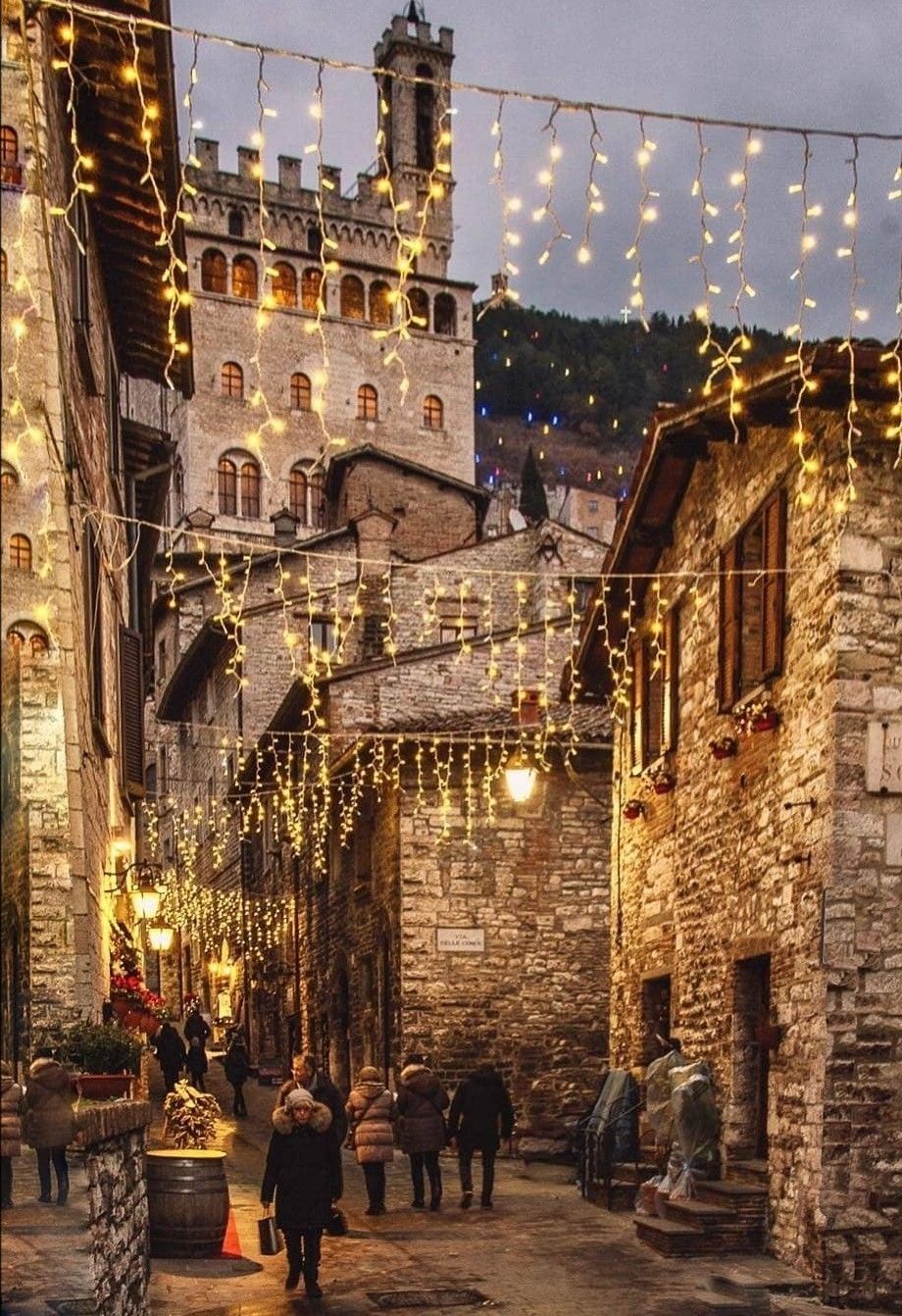 In the heart of the city, numerous native plants will give life to an Enchanted Forest inspired by the Third Paradise of the artist Michelangelo Pistoletto.

Santa Claus and the Elves are waiting for you at Monte Frumentario to open the doors of the magical world of Santa’s House!

Through the streets of Assisi there will be the Christmas Train for the joy of children, families and all visitors.

The work reflects the Neapolitan crib style and tradition and offers together with the Nativity a slice of extremely lively and crowded folk life with shepherds where reality is grasped with a smiling eye. The shepherds’ dress was made and sewn entirely by hand.

The Crib Of The Colle Del Paradiso

The Colle del Paradiso crib, conceived by Carlo Angeletti with passion and great sense of tradition, has been built since 1995 thanks to the availability of the Sacred Convent and the collaboration of volunteers. 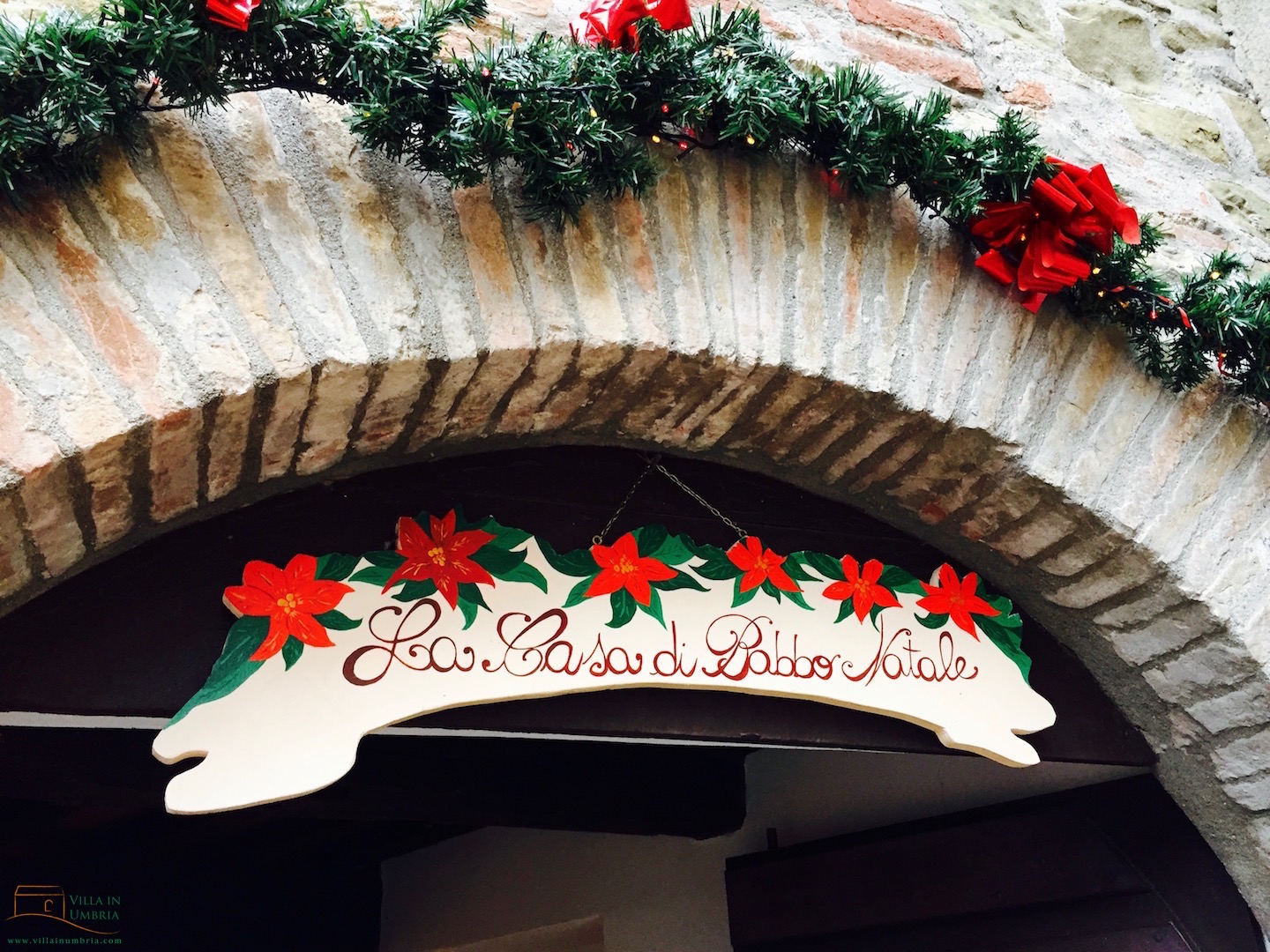 Local handcraft products, Christmas songs. On 22nd Father Christmas will arrive with lots of sweets for all the children, entertainment for kids and street food.

from the 16th November to the 29th December in Arezzo (SI) 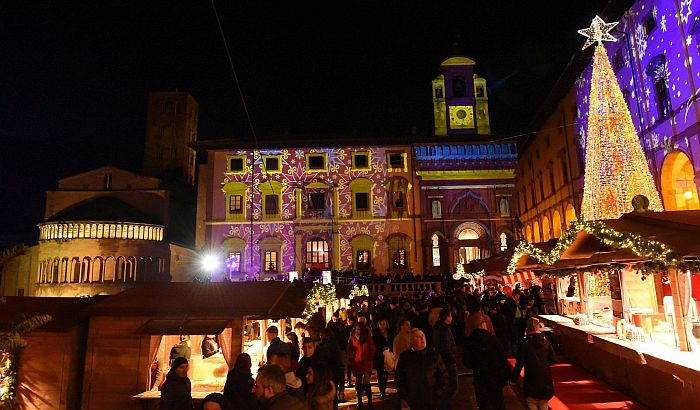 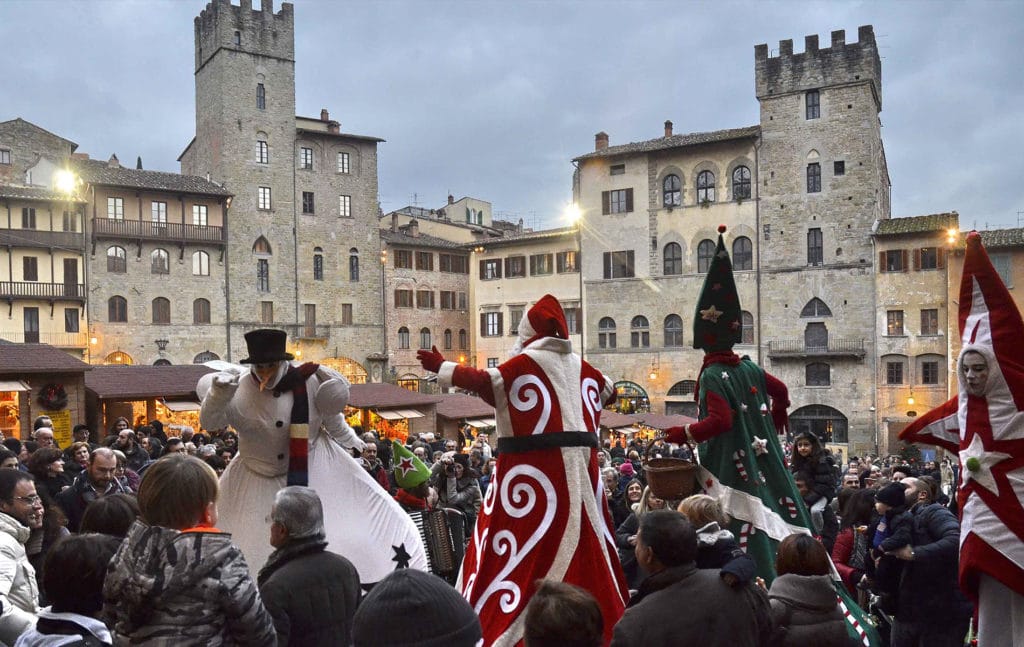 Traditional Christmas market will be made by exhibitors from Tyrol, Germany and Austria. You will be able not only to buy presents and Christmas decorations but also to taste the great variety of the delicious Tyrol beers! 34 wooden houses, the big Tyorl cottage where you will be able to taste beers and cakes from Tyrol. 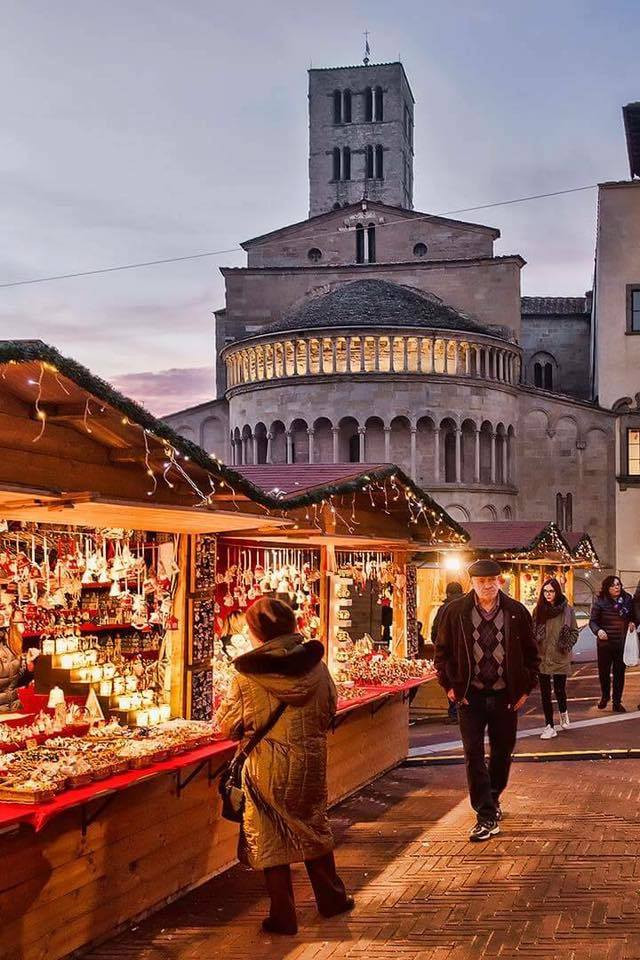 The Enchanted Village Lights Up

from the 7th December to the 6th January at Castiglione del Lago (PG). 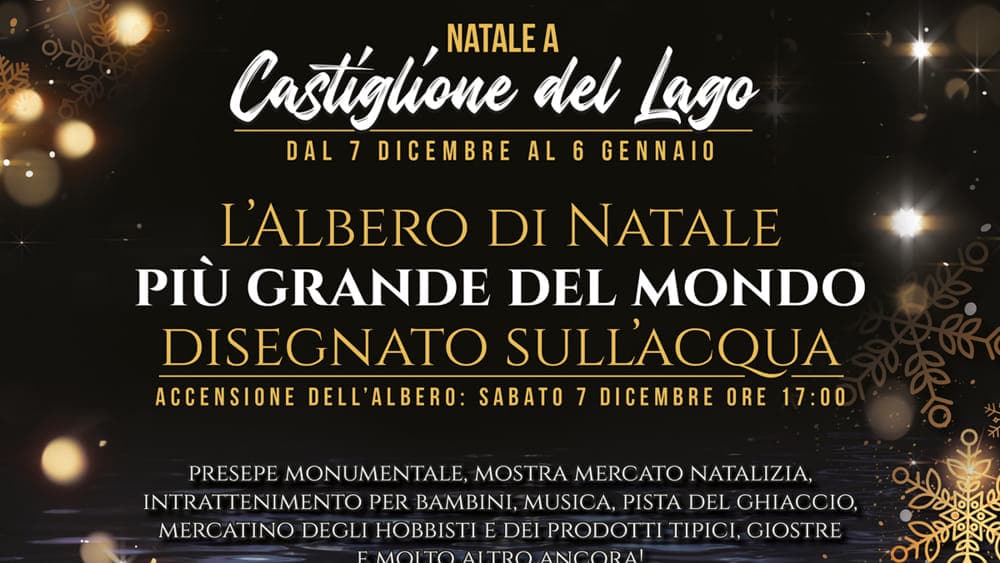 Starting 7 December, and until 6 January you’ll be able to see the world’s biggest Christmas tree drawn in lights on Lake Trasimeno. In the last couple of months Castiglionesi have been ‘buying’ light bulbs to be strung over the water in the shape of an enormous tree. You’ll be able to see it from just behind the castle tower. The effect is very spectacular and well worth a trip to this little town. The tree is a 1 km long, and the 2450 bulbs are attached to 5 km of cable held up by.

The tree is best seen from the olive groves behind the tower, but you need to buy a ticket. When you come to Castiglione leave your car in one of the parking sites and take the bus which will be driving round to collect visitors. Don’t take your car up – there’s nowhere to park round the walls. At the fountain, where you will probably be dropped, turn right along the walls and, instead of going into the town by the arch next to the Moroccan cafè, Bar Castello, go on until you see the ticket office. 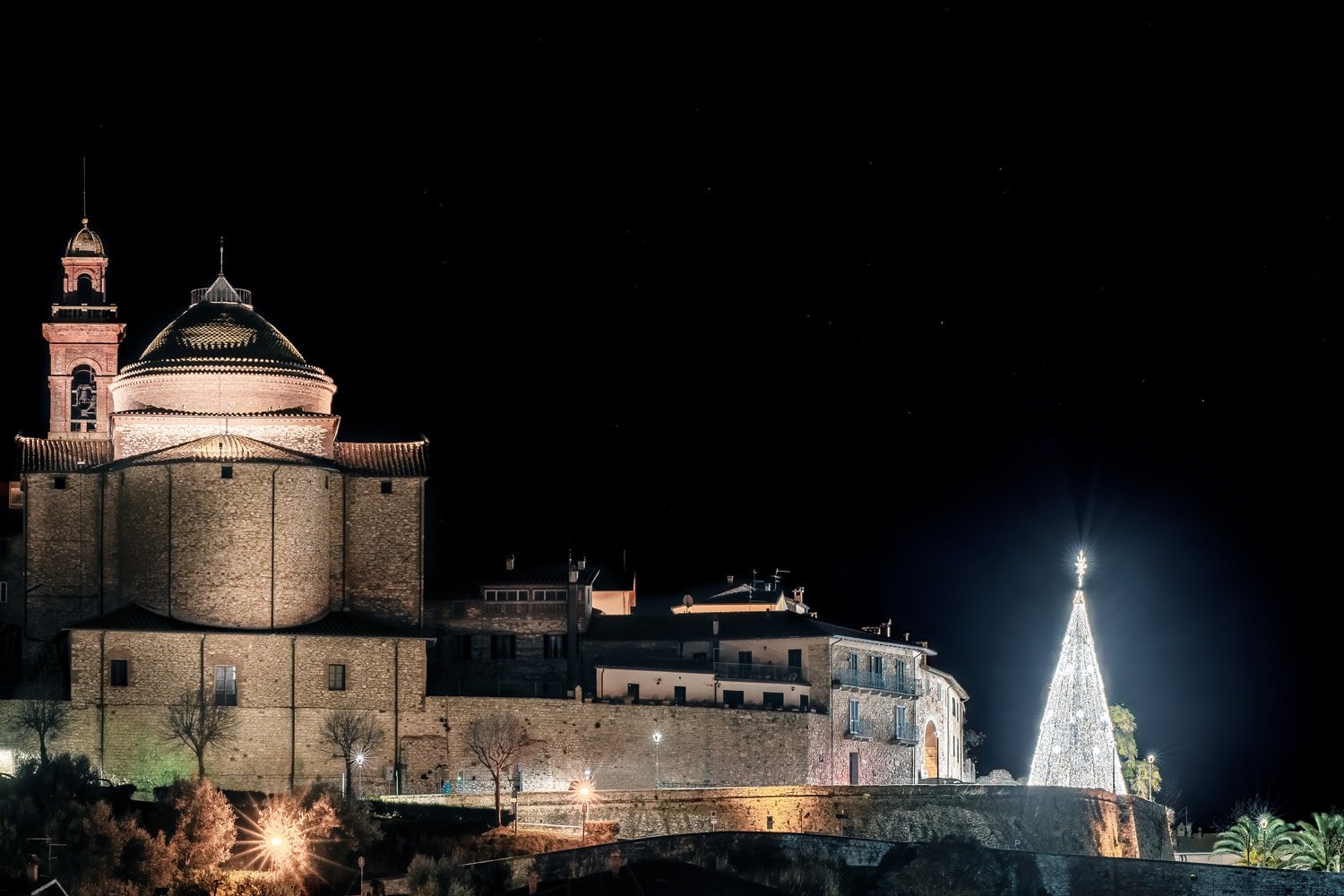 Children from 0 to 3 years, free

The giant tree has also got a positive impact on the environment: it’ll contribute to capture the C02 omissions!

From 28th December to 1st January 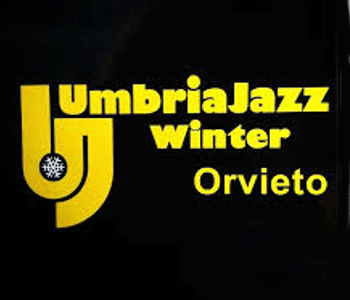 The Mancinelli Theater is the main stage of the program of Orvieto Jazz Winter 2019-2020, the venue for prime-time concerts; the Emilio Greco museum hosts the midday concerts, in a cozy and refined environment for the most intriguing proposals; the halls of the Palazzo del Capitano del Popolo, including the Etruscan Hall dedicated to pianists, are dedicated to the afternoon spaces. And yet, non-stop music, from noon to late night, at the Palazzo dei Sette, where jazz and food and wine, another excellence of Umbria and Orvieto, find an inviting symbiosis. Also at the Palazzo dei Sette, for those who love being late, there are jam sessions, one of the most identifiable rituals of jazz since its origins. It starts around midnight with the house band and continues until you feel like it. Finally, Jazz lunch and jazz dinner at the San Francesco. As always, the Funk Off will parade through the streets of the Historic Center.

The two moments that have always characterized Umbria Jazz Winter 2019 in Orvieto remain central. The first is the gospel concert that follows the New Year’s Mass in the afternoon in the Duomo. The religious songs of the African American tradition are a fixed presence in the festival programs. The second is the night that greets the arrival of the new year with the New Year’s Great Cenoni and the concerts before and after the stroke of midnight. Orvieto and Umbria Jazz await the people of jazz with the aim of confirming an event that is at the center of the cultural life and tourist attractiveness of next winter.

Hoping you liked the review, all Fontanaro Team wishes you a very Merry Christmas and a Happy New Year!