What to do during Easter holidays near Il Fontanaro (Tuscany) 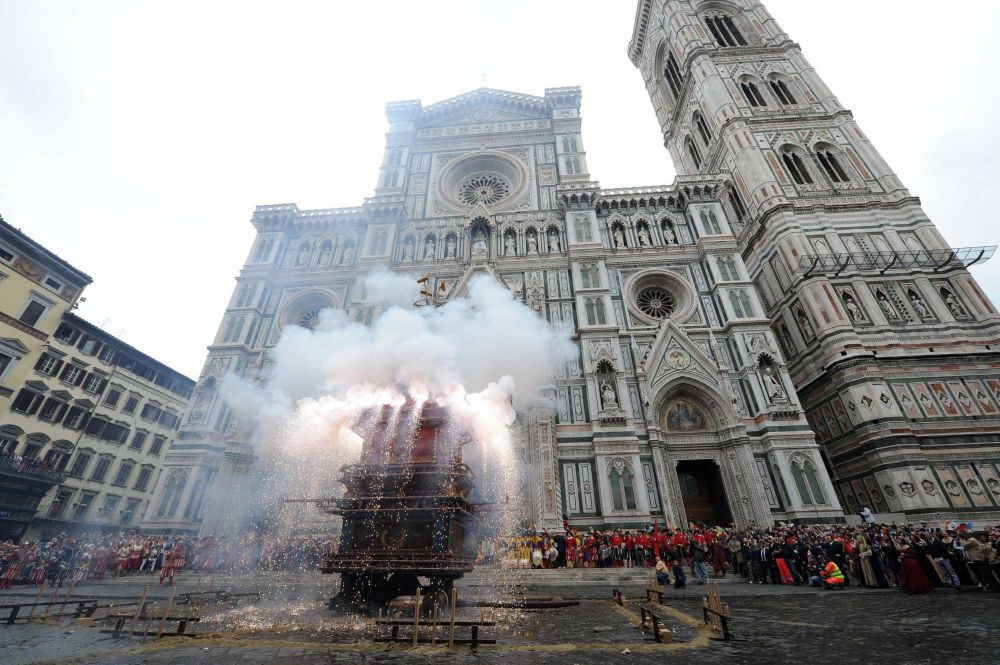 On Easter Sunday in Florence in front of the Cathedral, the spectacular Scoppio del Carro has been staged for 350 years. The ceremony begins at 10 in the morning, when the cart, loaded with fireworks, parades in procession with the flag wavers and drummers on the streets of the historic center and arrives in front of Santa Maria del Fiore. Here at 11 o’clock the colombina, a dove-shaped rocket symbolizing the Holy Spirit, flies out of the cathedral and sets fire to the Chariot, giving life to an extraordinary fireworks display.

Don’t miss it! Fontanaro can organize for you one day trips to Florence at any time!

Reenactments of the Passion of Christ

Among the re-enactments of the Passion, do not miss the Antica Giudeata in Chianciano Terme, a tradition of the seventeenth century which sees over 150 figures in costume parading through the streets of the village, with Roman soldiers on horseback, the Christ who carries the cross, the Pious Women, the procession of Pontius Pilate with the handmaids and dignitaries.

The Scalzi Procession  is also very suggestive, which is staged in Pienza, on Good Friday, preceded by twelve hooded and barefoot figures, holding a torch in their hands. 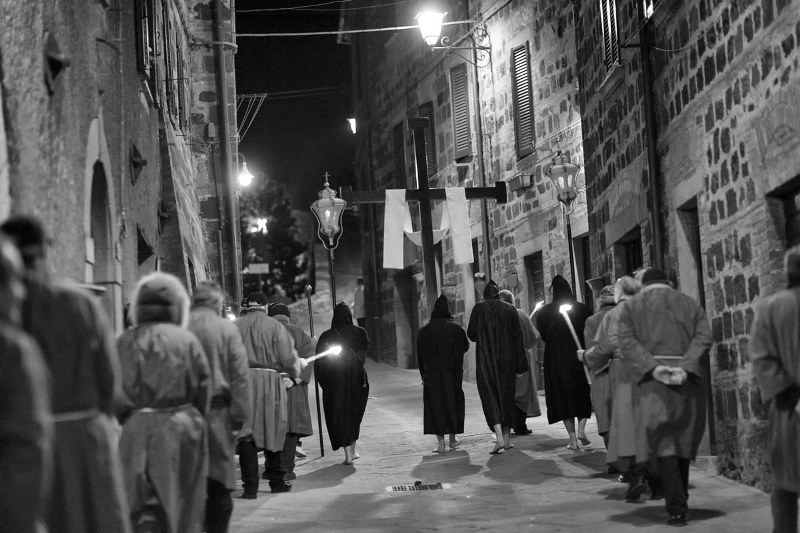 In Grassina there are 500 figures in costume of the historical procession of the re-enactment of the Passion: 90 minutes of parade that becomes a real and very powerful scenic representation.

In Radicofani, the re-enactments begin on Holy Thursday: after mass in the streets, the procession of penance takes place, in which twelve brothers of the congregation of Sant’Agata, in red cape, and twelve members of the confraternity of Misericordia, in white cape, take part. On Good Friday, the procession starts from the church of San Pietro and arrives at Sant’Agata, where the adoration of Calvary is held, in front of the splendid altar by Andrea Della Robbia.

On Easter Monday in Bibbona the Cedar Festival is held, with a market of typical local products, while in the evening the Palio delle Botti is staged, the race that sees the neighborhoods pushing the barrels through the narrow streets of the village. 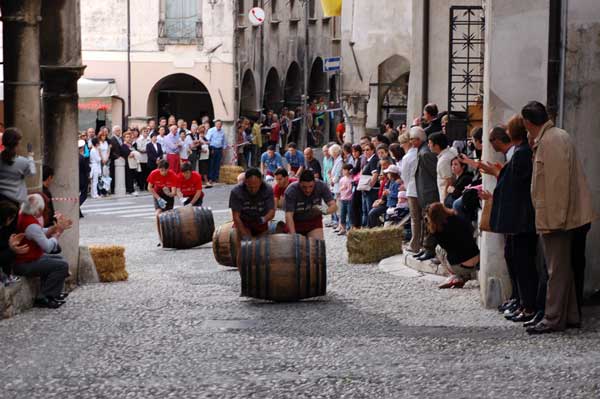 Also for Easter Monday at the Hermitage of Santa Caterina in Rio nell’Elba, do not miss the Sella della Sportella, the typical Easter cake of the island that was once donated by the girls to their lovers to seal their engagement. 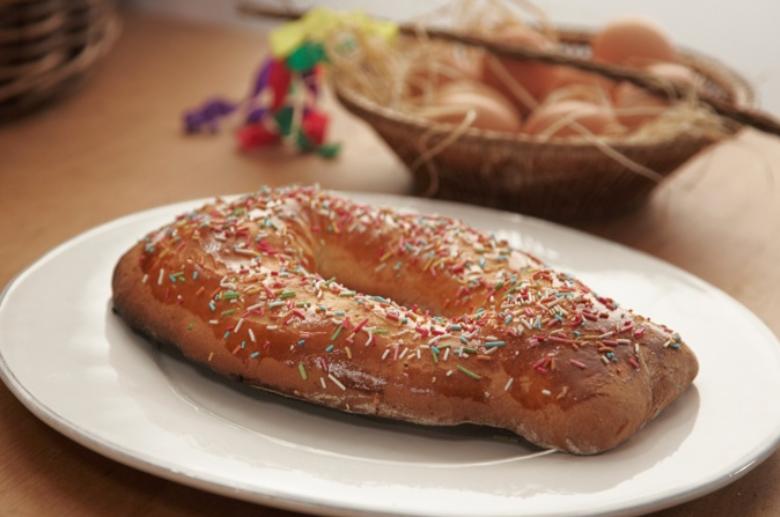 The festival of sweet flour is dedicated to ancient flavors which is celebrated in Piteglio, on the Pistoia mountains, on Easter Monday, with tasting of the specialties prepared with chestnut flour, such as chestnut and necci, similar to crepes, cooked on the plate and filled cottage cheese.

The party held on the Monday of the Angel in Quadalto is very original, a small fraction of the enchanting village of Palazzuolo sul Senio, where the Boiled Egg Festival offers not only food stands with Easter specialties, but also the opportunity to attend a series of challenges with boiled eggs.

Montalcino, the art and Brunello

The starting point of this itinerary is absolutely worth a visit. The imposing fourteenth-century fortress immediately suggests the urban layout of Montalcino: a medieval city with a military layout, furrowed by narrow and steep streets that hold true masterpieces such as those preserved inside the Diocesan Civic Museum of Sacred Art, which houses one of the richest collections of painting and wooden sculpture of the Sienese school. Among the numerous churches, the fourteenth-century S. Agostino, the neoclassical cathedral, the Sanctuary of the Madonna del Soccorso and S. Egidio, the “de’ senesi “church stand out. The Town Hall (late 13th century), a slender but well-built structure, is flanked by a tall bell tower almost a lookout tower topped by the “Campanone” which still marks the life of the whole country.

The solitary Abbey of Sant’Antimo rises 9 km from the historic center in the direction of Castelnuovo dell ‘Abate, whose monumental temple (XII century) is one of the highest examples of Romanesque-French found in Italy. 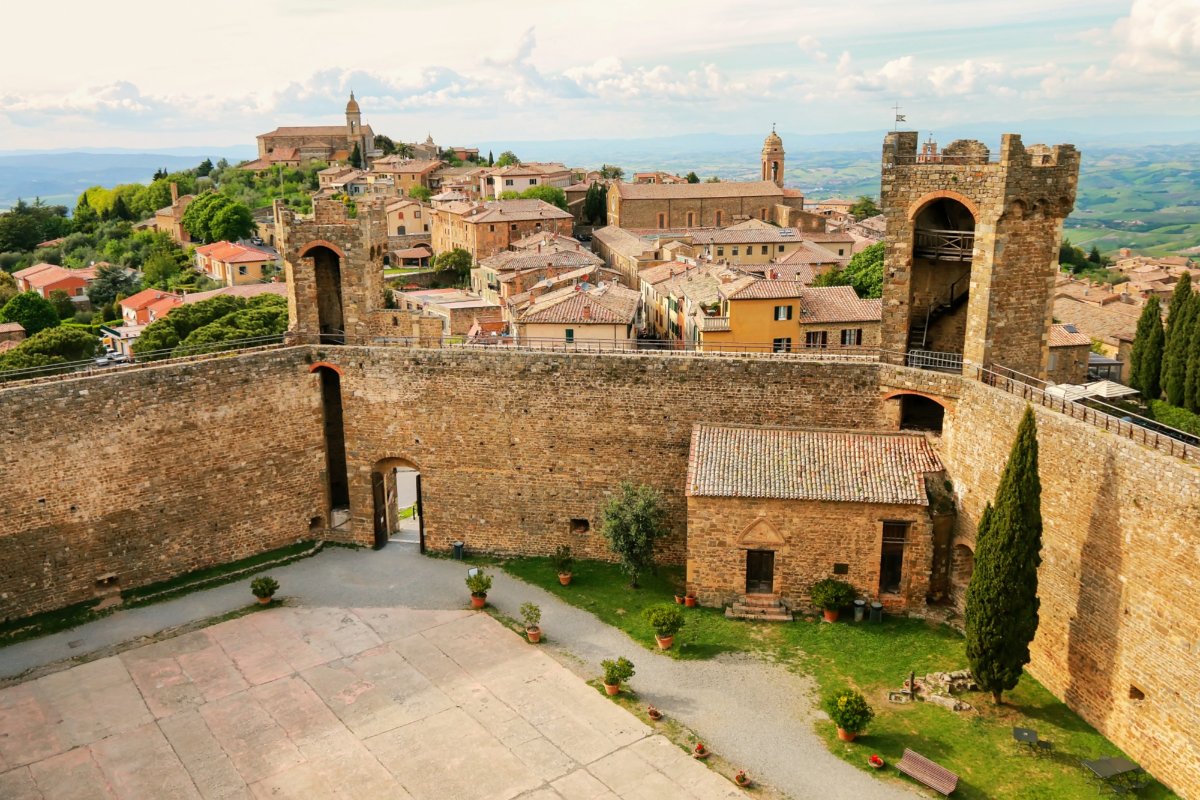 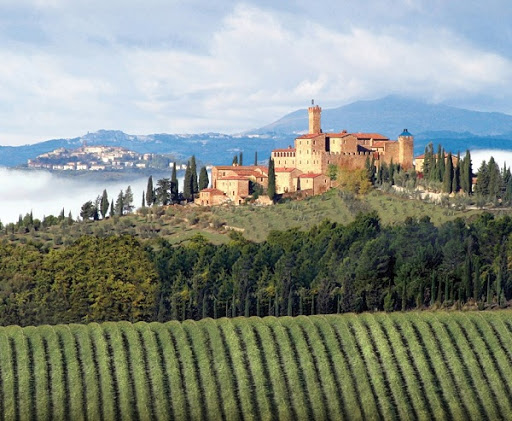 After passing the castle, continue to descend to the cellars of the Castelgiocondo company; the road winds through olive groves until you meet (on our right) the Corrione farm where you continue straight downhill; after passing a ditch (bed of a stream) almost always dry, you follow a long row of cypresses until you reach the crossroads on a paved road for Tavernelle where you keep the left slightly uphill. 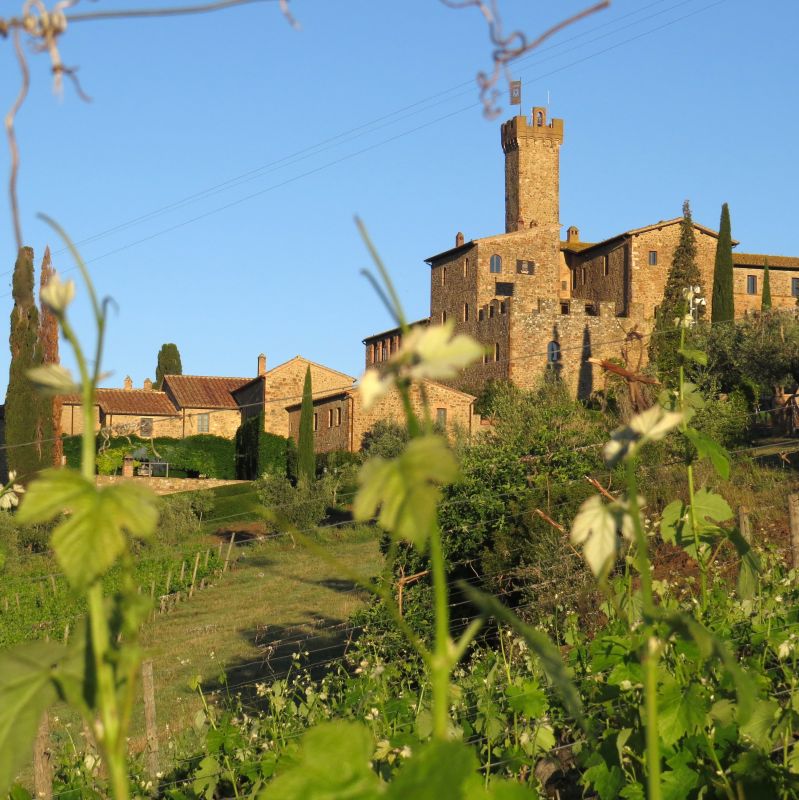 Once in Tavernelle, just under the Banfi winery sign, turn left between two vineyards. After you take the crossroads to the right for the Mocali farm uphill on a narrower road through the woods passing by the Brizio farmhouse.